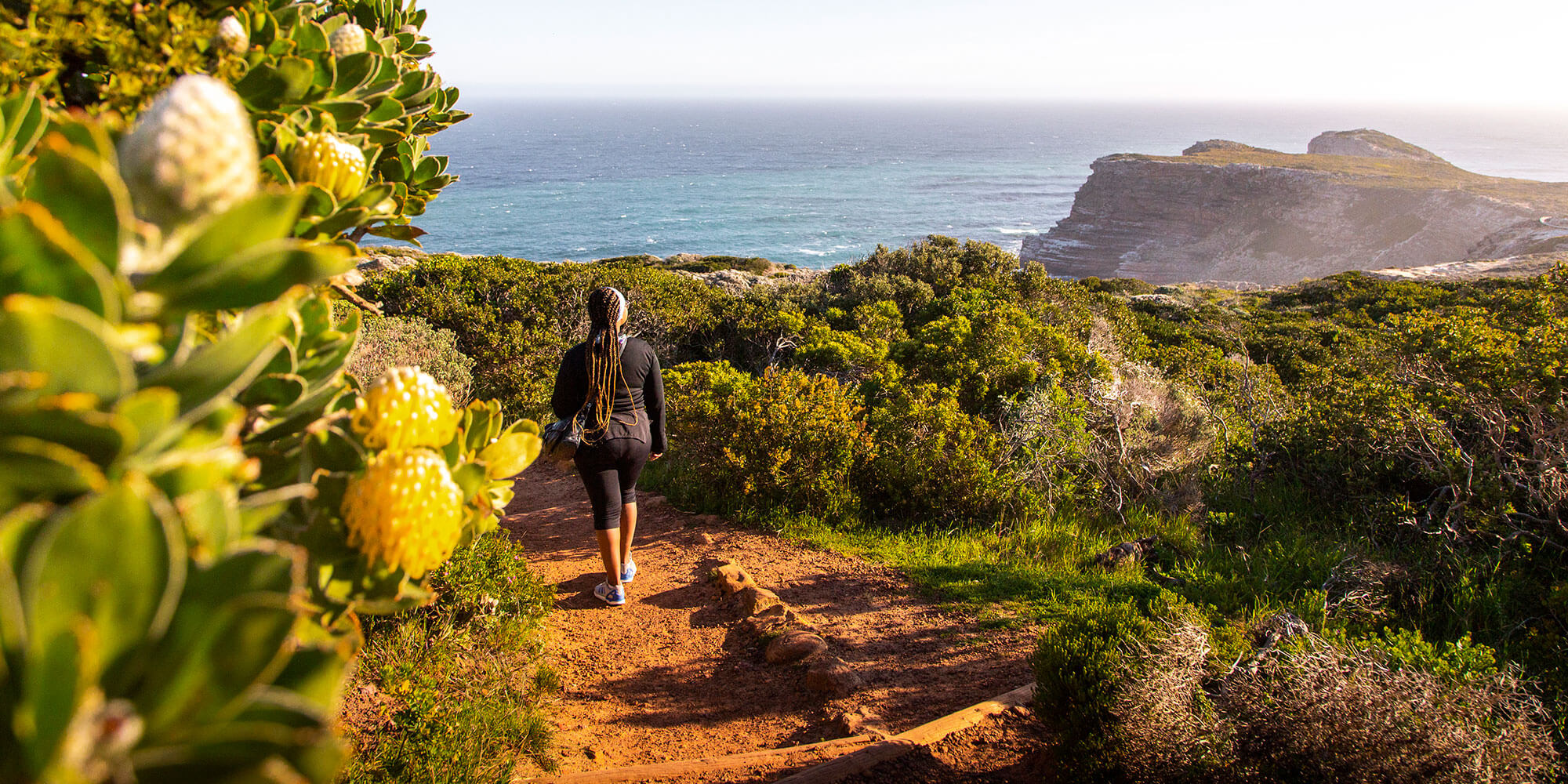 Winter in the Cape can be days of grey skies and unrelenting rain. But in between the cold fronts, you’ll also find ‘Champagne weather’: soft sunshine, crisp air and blue sky above. If you’re gifted one of these perfect days, I can highly recommend an outing to the Cape Point section of Table Mountain National Park.

It was on just such a day that I found myself in the company of Justin Hawthorne, a mountain guide with a passion for plants. “You have to walk to really appreciate fynbos, to see the detail,” he said as we set off on the Kanonkop Trail, an easy 6km walk that offers spectacular views over False Bay. With more than a thousand floral species in this section of the park, there would be plenty to study.

While spring is the time of year usually associated with flowers, fynbos boasts such a diversity of species that there is almost always something in bloom. In winter the proteas and ericas come to life, and Justin promised that there were some 50-70 winter-blooming plants that we could hope to spot.

The trail up to Kanonkop ascended straightaway and the strandveld vegetation that characterised the coast soon made way for mountain fynbos. One of the first flowers to attract Justin’s attention was the blombos Metalasia muricata, its tiny white blooms exuding a delicious honey scent. Just as sweet-smelling were the pale pink bells of Erica ericoides, one of many erica species found at Cape Point.

The fragrant nature of fynbos was also on display in the confetti bush Coleonema sp. with its pretty white flowers. Belonging to the same family as buchu, this shrub releases an aromatic scent when the leaves are bruised. Justin explained that the tiny dark spots under the leaves are oil glands; when ruptured, they exude their fragrance – a deterrent to antelope that might want to browse the plant. The blombos is a hardy shrub found in coastal and mountain regions of South Africa. This fragrant plant feeds honeybees and thrives in sandy soil. The mountain anise buchu (Agathosma ciliaris) gets its name from the aniseed or licorice scent released when the leaves are crushed. The delicate mauve flowers attract bees by the dozen.

“Much of the animal life in the Cape is small, elusive and nocturnal: Cape grysbok, caracal and porcupine. This is a real space where they can thrive,” Justin said. He explained that because no cars were permitted in Cape Point at night, wildlife could move around freely and safely. On our short walk we found caracal scat, a hole dug by a porcupine and several antelope tracks, from the tiny prints of a klipspringer to the large imprints of eland.

We weren’t lucky enough to spot signs of Cape clawless otter (they tend to be active the two hours before sunrise), but we found baboon tracks on the trail. Baboons play a role in sustaining fynbos by dispersing seeds, but even more important is a much smaller creature: the ant.

Ants carry the seeds of several fynbos species down to their nests, where they feed on a part of the seed and abandon the rest. The discarded seeds build up a seedbank underground, ready to germinate after a fire. This is why ecologists are so concerned about the invasion of Argentine ants: they don’t bother to bury fynbos seeds, thereby depleting the seedbank.

Winter is the time for proteas and we were not disappointed. Black-beard sugarbushes Protea lepicarpodendron dotted the slopes, the tips of their flower bracts fringed in dark purple, almost black, hair. What we tend to think of as protea flowers are in fact flowerheads. The ‘petals’ are the outside floral bracts, hairy leaves that protect the masses of individual flowers inside. Proteas are pollinated by sunbirds and sugarbirds and these firm leaves provide a structure for the birds to perch on.

Whereas the flowerheads of sugarbushes are as big as artichokes, on the other end of the scale we found the tiny Peninsula silkypuff Diastella divaricata divaricata, with flowerheads no bigger than a fingernail. This, too, is a type of protea, and endemic to the Cape Peninsula south of Silvermine.

Everywhere we looked there was something to admire: from the deep blue of lobelia to the pale pink of an iris. It seemed in no time at all we were on top of Kanonkop, standing on the flat rock next to the cannon. A breathtaking view of False Bay spread out in front of us, but the even more impressive sight, I felt, was at our feet: the rich array of fynbos flowers. The black-bearded sugarbush has a creamy-white flowerhead fringed with a dark pelt. This protea is near-threatened, having lost 30% of its habitat over the last 60 years. The Peninsula silkypuff is endemic to the Cape Peninsula, occurring from Silvermine to Cape Point. Their nut-like seeds are sought out by ants and taken to their underground nests. This stunning viewpoint is a scenic spot to have a drink or bite to eat.